ATV Injuries and Deaths in 2020

The year 2020 has seen a surge of injuries and deaths related to the operation of ATVs, UTVs, and other recreational vehicles in Missouri and the Kansas City area. In early August, one teen girl was killed and her passenger was seriously injured after they lost control of the Polaris UTV they were operating on in Saline County. Their vehicle skidded off the road, hit a ditch, and overturned. During the same week, a 43-year-old La Monte man died after the ATV he was operating overturned while negotiating a curve, landing on top of him. And in September a 29-year-old female Forsyth resident was killed after her 2019 Honda Rubicon overturned, ejecting her. 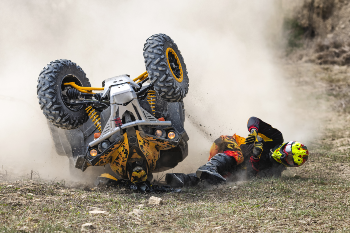 At the beginning of December, Honda Powersports announced a recall of over 118,000 off-road vehicles due to a possible defect with the electric power steering, which can send the vehicles out of control. According to the U.S. Consumer Product Safety Commission recall alert: “The ROV can lose steering control, posing crash and injury hazards.” To date, Honda has received eight reports of paly in the steering resulting in such serious outcomes. The recalled vehicles include the model year 2017-2020 Pioneer 700 two and four-seaters beginning with the VIN of “1HFVE02,” and Pioneer 1000 three and five seaters from 2016-2020 with the VIN of “1HFVE04.” Consumers are instructed to contact an authorized Honda Powersports dealer to have their vehicles inspected and repaired.

Honda is not the only manufacturer of these vehicles with safety issues. Honda’s recall came shortly after a recall by Polaris in November of nearly 20,000 RXR off-road vehicles for a clutch failure. In July Polaris recalled over 13,000 UTVs for a crash hazard and in April, Polaris recalled 80,000 UTVs and ATVs for another clutch problem.

The operation of all-terrain vehicles can be both exhilarating and dangerous. Unfortunately, untrue to their name, these vehicles are not suited to all types of terrain. It is important to understand how to operate these vehicles before putting one’s self behind the steering wheel. According to HG.org, 135,000 people are injured every year due to ATV accidents, and over 700 people are killed. Of those killed, over 1/3 are under the age of 16 and many of the accidents were preventable by simply following safety rules and guidelines. These accidents can sometimes be attributed to negligence or recklessness on behalf of the driver, but the possibility of equipment malfunction poses an even greater risk for injury and/or death.

According to the Missouri Highway Patrol, no person under the age of 16 shall operate an ATV in Missouri unless he or she is accompanied or under the direct supervision of a parent or guardian. However, these guidelines do not apply to the operation of these vehicles on private property. Additionally, no person should operate an ATV in a careless way as to endanger the person or property of another or while under the influence of alcohol or drugs. A securely fastened safety helmet is required unless the operator or passenger is over the age of 18.

If you are a rider of ATVs and other such recreational equipment, it is crucial to follow all safety guidelines and applicable laws to keep you, your loved ones, and your friends safe and to avoid any personal liability for injuries resulting from the dereliction of such standards.

If you feel you have been injured or you have lost a loved one due to ATV mechanical malfunction or the negligence of another individual, it is important to seek legal counsel as soon as possible as there are specific limitations of how long such claims can be pursued. The team at Kendall Law Group is experienced in the areas of personal injury, wrongful death, and product liability. Kendall Law Group has a long track record of pursuing these claims. If you or a loved one has suffered serious injuries and/or death while riding or operating an ATV or recreational vehicle, give Kendall Law Group a call today for a free, attorney consultation.